Image of the week 3

Images of the Week

Dorothy Coke taught at Brighton School of Art from 1939 and was also a prolific artist. In 1947, Brighton became a regional art college, attracting more students from a wider area. War and its aftermath had already delayed building plans and by the late 1950s the old school desperately lacked space and equipment. Nevertheless, Dorothy Coke's 34 numbered drawings recording the School of Art before it was redeveloped in the 1964 were a 'requiem' - the word 'Why' appears alongside one of them.

Title of Work: Grand Parade, Brighton before demolition in 1964 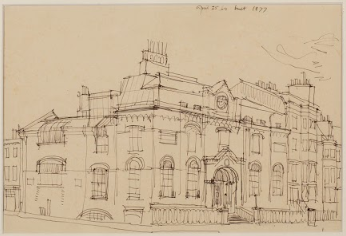 Challenge: Draw your home in a similar style.